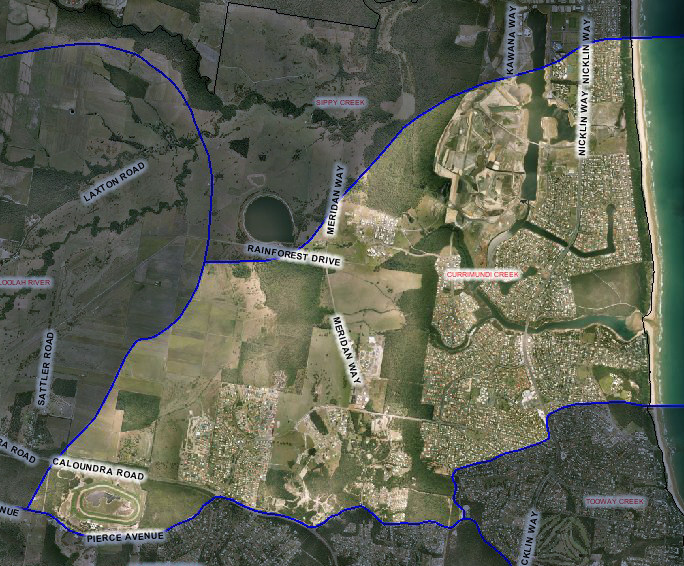 The headwaters of Currimundi Catchment begin with Currimundi Creek, an independent coastal stream that drains an area adjacent to the south-eastern quarter of the Mooloolah River catchment with an area of 2760 ha. and average rainfall of 1580 mm/year

The headwaters of the Creek arise in very low, undulating remnant sand dunes, descending along wetlands under a stand of Melaleuca forest that acts as a filter system into areas of lagoonal mud deposits and finally widening into a lake clogged intermittently by windblown or tidal sand. This catchment has been extensively modified by urban development and the construction of a series of canals that are in length almost the same as the natural creek channel. The catchment volume is also affected by a continuous flow passing from Kawana Lake into the Currimundi Lake system.

Water from the catchment enters the Currimundi System of Lake, Creeks and Canals through (1) surface run-off, (2) ground water, and (3) storm water drainage systems.

Currimundi Lake forms an important open space link of water body and bushland parks that surround the waterways. This bushland forms a Riparian Corridor that helps to stem erosion and which sustains a variety of wildlife. Vegetation varies throughout the catchment and includes Melaleuca wetland, Eucalypt woodland, patches of Coastal heath land and Littoral rainforest.

The waterways themselves contain various species of marine life and attract many different types of birds such as the osprey. The native flora is a home to a diverse range of wildlife. The Lake is also important for the Migratory Bird population.

SUBURBS WITHIN THE CURRIMUNDI CATCHMENT:

Manage Cookie Consent
To provide the best experiences, we use technologies like cookies to store and/or access device information. Consenting to these technologies will allow us to process data such as browsing behavior or unique IDs on this site. Not consenting or withdrawing consent, may adversely affect certain features and functions.
Manage options Manage services Manage vendors Read more about these purposes
View preferences
{title} {title} {title}